Fairfield is the southern-most neighbourhood in the city of Victoria, on southern Vancouver Island. It is Victoria's largest community by population and area, when considered together with the adjacent Gonzales neighbourhood.

Fairfield is a pleasant, residential community with a mix of low-rise apartments and single family homes on well-maintained, tree-lined streets, such as Wellington Avenue. It is bounded to the east by Oak Bay, to the north by the community of Rockland, to the west by Beacon Hill Park and to the south by the ocean shoreline of the Strait of Juan de Fuca. Fairfield features the historic Ross Bay Cemetery, as well as many heritage buildings dating from the late Victorian and Edwardian periods. The Fairfield Gonzalez Community Association (FGCA) serves "to enhance the quality of life in Fairfield by involving community members in identifying and acting on the needs of area residents"

Significant population growth and demographic shifts are expected for southern Vancouver Island. The City of Victoria has prepared a neighbourhood profile from 2001 data

Landmarks and areas of special interest include:

Cook Street Village, a commercial area characterized by sidewalk-flanking Horse Chestnut trees, low-height buildings and the absence of bisecting roads, is a popular shopping and social strip in Fairfield, with cafés, restaurants, small boutiques and grocery stores. The locally-renowned Pic-a-Flic video store, Moka House, and Café Fantastico can be found here. In 2006, proposed developments within this part of Fairfield sparked concern and debate among local residents.

Another small neighbourhood centre, known as Five Corners, is located at the intersection of Moss Street and Fairfield Road, featuring Sir James Douglas Elementary School, Fairfield United Church, Fairfield Bicycles, a general store, fish and chips shop, veterinary clinic and other services. This location has historically been a hub of community activity since the community's earliest days. The school yard of Sir James Douglas school is the site of the locally-famous Moss Street Market, which runs weekly from April until October.

The Fairfield Plaza, a compact strip mall, is another, somewhat more prosaic shopping area, situated near the Fairfield/Gonzales border. It is worth noting however, as having the first Thrifty Foods of the Thrifty Foods grocery store chain, as well as the Ross Bay Pub, the Fairfield Medical Treatment Centre, government liquor store, Home Hardware and other enterprises.

Across Fairfield Road from the western entrance to the Fairfield Plaza is Emily Carr’s grave, in the Ross Bay Cemetery. 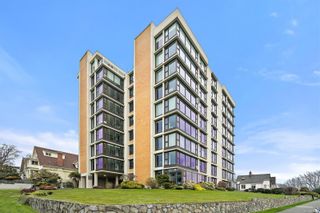